I lived in Boston till I was 28 years old. I moved to Northern Virginia in 2009. Several times during introductions at my new job, I would tell co-workers where I was from. "Boston, oh my. I could never live there", they would say, "Its snows far too much in New England!" Meanwhile, during the time I lived in Virginia we received record snow fall.
When it came time to move to Montana, those same co-workers all teased me about harsh Montanan winters. I have lived here a year now and it has only snowed about 3 times. Matter of fact its been remarkably warm and we have seem many winter days in the 50's. Its almost as if I am have an "opposite weather" effect where ever I happen to be living.

My home state of Massachusetts is having a major snow storm today and tomorrow. The Governor has already called a state of emergency, many stores and businesses have already closed down. MA has a issued vehicle traffic ban statewide at 4pm today. That means that if you are on the road and are not an emergency vehicle, you can be subject to a $500 fine! This is a pretty serious storm, I hope everyone stays safe and sound and is able to just enjoy the snowfall.

So I have stopped drinking caffeine for a while. In my kick to be healthy, I figured that might be an easy win in the weight loss game.  I love tea and recently read in a forum that a pregnant woman was drinking hot water, honey and milk to curb her tea cravings. I am not pregnant but I wanted to try it. 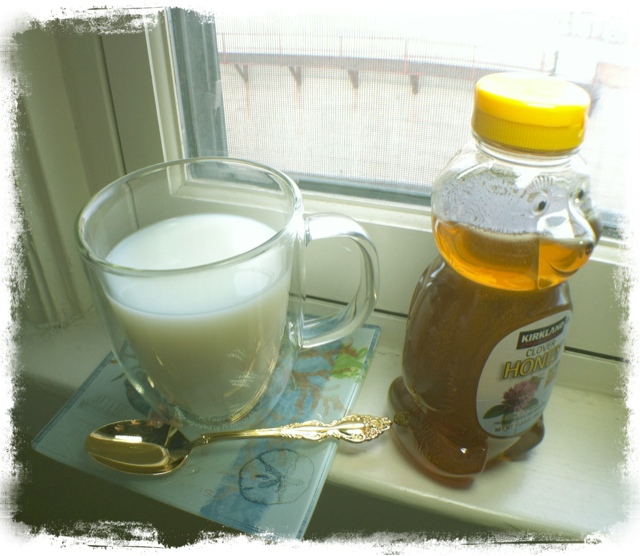 I love it.
It is basically a softer version of warm milk. The honey adds some sweetness and its great for cold mornings. I basically prep it like I would tea. Hot Water, teaspoon or two of honey, a splash of milk. Hits the spot and I can avoid the caffeine for now.